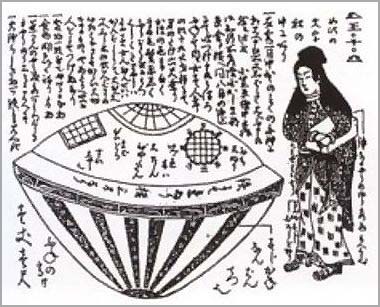 
- quote
The Utsuro-bune or the hollow ship refer to an unknown object which allegedly washed ashore in 1803 in Hitachi province on the eastern coast of Japan. The tale has been told in three texts; Toen shōsetsu (1825) , Hyōryū kishū(1835) and Ume-no-chiri (1844). The book Toen shōsetsu contains the most detailed version.

According to legend an attractive woman arrived to the coast of Japan aboard the Hollow Ship. This woman was unlike the other women in the region. Local fisherman accompanied this strange-looking female inland, but they were unable to establish communication since this visitor could not communicate in Japanese.

This historical event took place on February 22, 1803 when the round looking object, which according to texts was made of iron and glass, floated ashore. The object was unlike any other ships in the region, and according to history, at the time this “ship” washed ashore- there were no round ships in Japan. This “hollow ship” had very strange symbols on its metallic surface which the locals did not manage to decipher. According to the Ume-no-chiri , the ship reminded the witnesses of a rice cooking pot, around its middle it had a thickened rim. It was also coated with black paint and it had four little windows on four sides. The windows had bars and they were clogged with tree resin. The lower part of the boat was protected by brazen plates which looked to be made of iron of the highest western quality.

The female visitor was not very tall, according to ancient texts, 1.5 meters, she had very pale skin and was dressed in a very strange way, the woman seemed very polite and had fiery red hair with red eyebrows. In her hands she held a box that was 60 cm in length.

There were two books published early that speak about this strange incident. One book is called Toen Shousetsu, published in 1825 and the other book is Ume no Chiri, published in 1844.The stories that were told in the books are considered to be based on old tabloid-like newspapers that are commonly called kawara-ban, while there are also many stories that originate from local folklore.

One of the most mysterious and interesting aspects of this legend revolves around the box that the female visitor held in her hands. A rectangular shaped box was made out of material unlike anything found in Japan. The female visitor did not allow anyone to touch the box so we can assume that it was extremely important to the visitor, but the exact purpose of the box is till unknown. 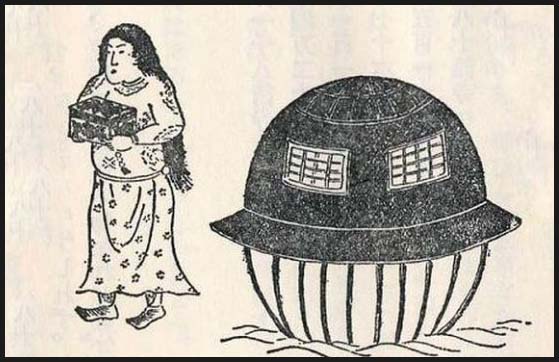 In the Toen shōsetsu story, an old villager is said to have made a speech at the female visitor was present in the village:

“This woman may be a daughter of a king in a foreign country and might have been married in her home country. However, she loved another man after marriage and her lover was put to death.
Since she was a princess before, she could get sympathy and avoid the death penalty. She had been forced to be put in this boat and was left to the sea to be trusted to fate. If this guess is correct, her lover’s severed head is inside the square box.
In the past, a similar boat with a woman inside drifted ashore in a beach not far from here. In that incident, a severed head placed on a kind of chopping board was found inside the boat. Judging from this kind of secondhand information, the contents of the box may be similar. This may explain why the box is so important to her and she is always holding it in her hands.
We may be ordered to use much money to investigate this woman and boat. Since there is a precedent for casting this kind of boat back out to sea, we had better put her inside the boat and send it away.From a humanitarian viewpoint, this treatment is too cruel for her. However, this treatment would be her destiny.”
- source : Ivan Petricevic 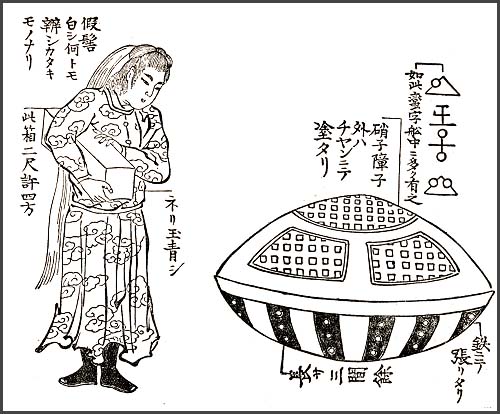 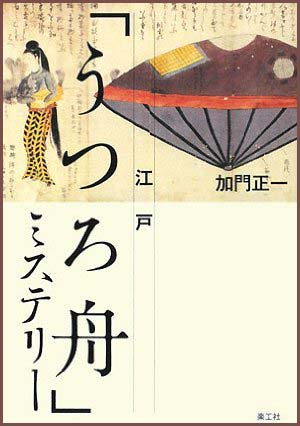 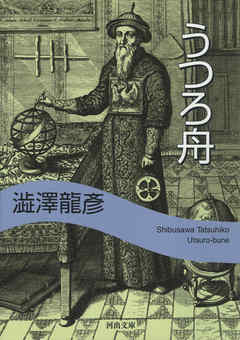