Now comprising the following districts in Kanda :
神田連雀町 - - - 万世橋 Manseibashi bridge toward 須田町一丁目 Sudacho first district and 、淡路町二丁目 Awajicho second district.
This district existed since 1573, was destroyed by fire in 1657. The inhabitants were relocated to
Mitaka, taking the names of 三鷹 地区名 - - 上連雀、下連雀. (- see below )
Now the 交通博物館 Traffic Museum is the central part of it.

The street vendors kept their backpacks at the entrance of the home. There were also many craftsmen who made the renjaku backpacks. 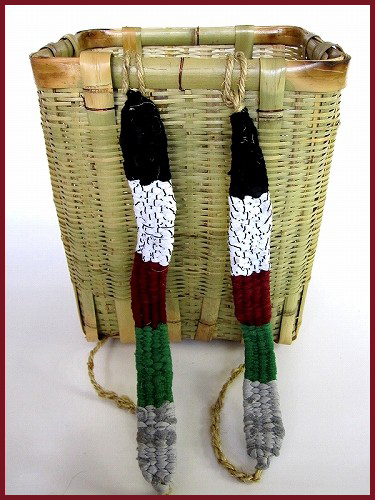 The name refers to the renjaku 連尺 / 連索 backpacks of the street vendors who lived there, carrying their ware around Edo.
shiyoiko 背負子（しよいこ) "street vendor with a backpack" 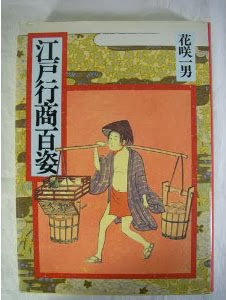 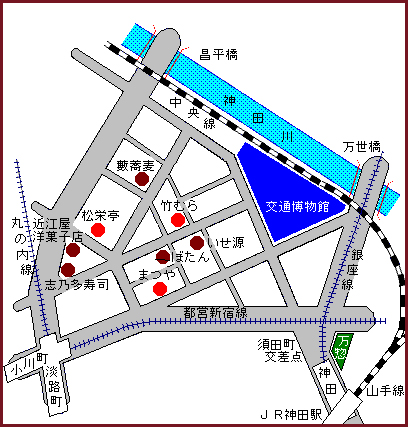 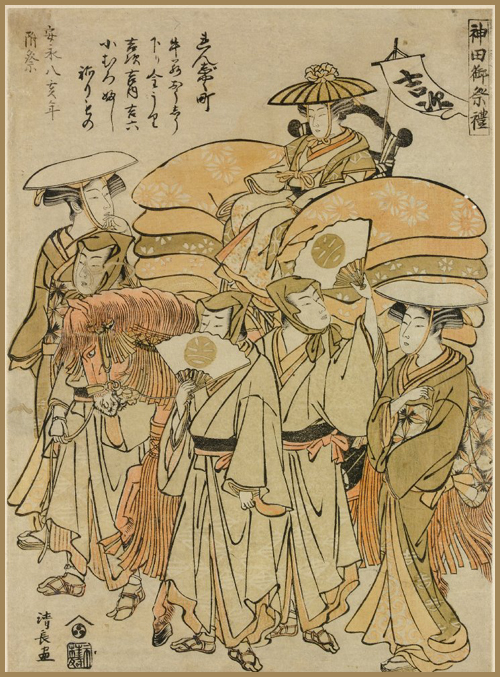 Girl dressed as the legendary gold merchant Kaneuri Kichiji, seated on a horse piled with cushions, and surrounded by 'attendants', part of the Kanda Festival procession.
- source : britishmuseum.org - 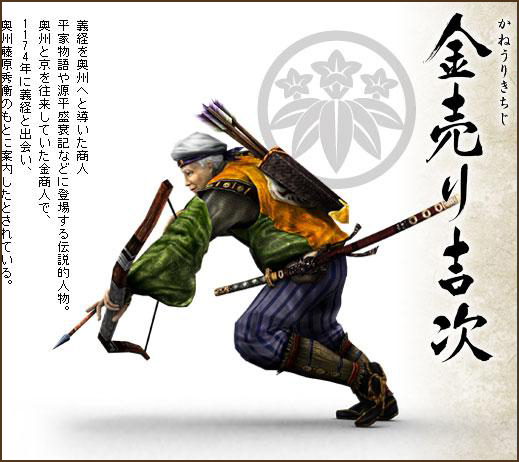 
- quote -
When Shanaō (Ushiwakamaru, later Yoshitsune) was sixteen years old, a merchant named Kitsuji Sueharu (also known as Kaneuri Kichiji or Kichiji Nobutaka) visited Kurama based on rumors of the talented youth. He had no idea what the child in question looked like, but he happened to spot Shanaō while walking the mountain path. He was surprised by the outstanding figure - almost doubted his eyes at the splendor - but Kitsuji knew he found the famous child of Yoshitomo.
When he returned to Oshu, he told Fujiwara no Hidehira of his experience. Hidehira, who was ecstatic to hear that the rumors of Yoshitomo's offspring were true, ordered for the boy to be fetched to Oshu at once. He wished to have the child nearby should the battle against the Heike one day rise again. After being informed about the history behind the rumors, Hidehira was willing to accept the boy as though he were own son, wishing to protect Yoshitomo's lost legacy.
- source : wiki/Yoshitsune_Minamoto -


Oshu Hidehira Uhatsu no Hanamuko: Kurayama no dan -
奥州秀衡有うはつ壻（おうしゅうひでひらうはつのはなむこ）;
Awaji Puppet Theater
- quote -
One day, a Heike warrior Nanba Jûrô came to the foot of Kuramayama mountain in Kyoto. He stopped at a teahouse, which served dengaku (skewered tofu glazed with miso). He came here because he heard that Ushiwakamaru of Genji clan had hidden himself in the mountain. Suddenly, a shout of victory came from the rear mountain. Nanba Jûrô confirmed that Ushiwaka had collected his allies as he suspected and went back to let Heike party know the fact.

When Ushiwaka tried to fight with the manager, the manager suddenly kneed in front of him and said ‘You are truly the lord Minamoto no Ushiwaka’. In fact, the manager named Kaneuri Kichiji was a servant of the lord Hidehira in Ôshû. He showed Ushiwaka a letter from his lord, which tells that Hidehira wanted to invite Ushiwaka to Ôshû to prepare for a war against Heike. Ushiwaka accepted the proposal and left for Ôshû, disguising himself as a mean road-horse man. Ushiwakamaru was 16 at that time.

In the meantime, Nanba Jûrô came back bringing Heike soldiers with him. Kichiji wore a mask of Tengu (a long-nosed mountain goblin) and tried to threaten and chase them away. But he was discovered as human and he fought with them. Finally, Kichiji destroyed all Heike warriors and hurried for Ôshû, following Ushiwaka.
- source : awajiningyoza.com - 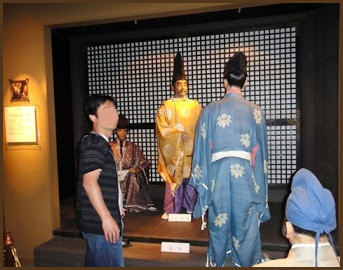 Hidehira, the third generation Oshu-Fujiwara, was appointed governor of the area in 1170 and governor of Mutsu in 1181. Hidehira became the most powerful man in Mutsu and was known as the ‘King’ of northern Japan. At the same time, Yoshitsune Minamoto came to Hiraizumi, counting on Hidehira’s help.
Yoshitsune was accompanied by a gold trader named Kaneuri Kichiji.
Yoshitsune was the son of Yoshitomo Minamoto who was defeated by Kiyomori Taira in Heiji Rebellion. The scene depicts Hidehira welcoming Yoshitsune in front of the mansion Kyara-no-gosho.
- source : yumeyakata-historical-tale-of-oshu -

After arranging the meeting of Hidehira and Yoshitsune, Kichiji went back to Kyoto, with many presents and a lot of of gold dust.
At least that is what the legends tell us. There are doubts whether he was a real person or just an addition to the Yoshitsune legends.
Still there are places which claim to have the grave of Kichiji (or his brother) in various parts on the way from Kyoto to Hiraizumi 平泉. Some legends say he was murdered, others say he fell ill and died on the way. 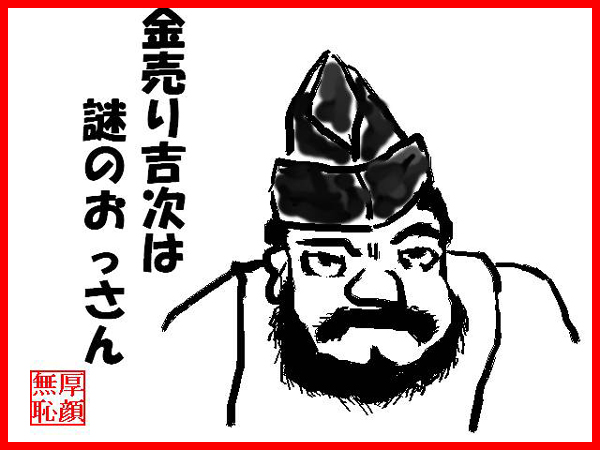 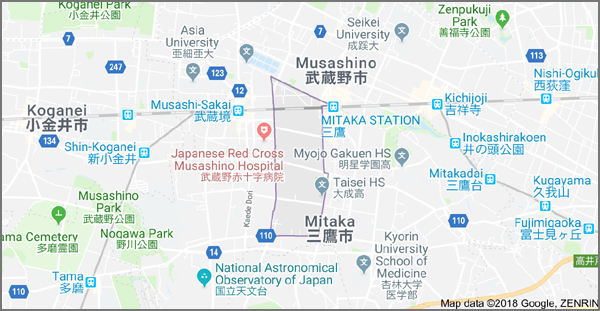 The new farming area was called 連雀前新田 Renjaku-mae Shinden New Fields in 1957, after 明暦の大火 the Great Fire of Meireki.
Mitaka used to be the hawking area of the Tokugawa Shoguns.

Mitaka city 三鷹市 "three hawks"
is located on the Kantō Plain, just outside the 23 special wards of Tokyo Metropolis, which are on its eastern borders.
The Tamagawa Josui Canal, which runs alongside Mitaka station, has an important place in history, built in 1653 to feed the local metropolis. It is also the place where novelist Osamu Dazai committed suicide in 1948. The National Astronomical Observatory of Japan is located in Mitaka.
- History
The area of present-day Mitaka was part of ancient Musashi Province. In the post-Meiji Restoration catastral reform of July 22, 1878, the area became part of Kitatama District in Kanagawa Prefecture.
The village of Mitaka was created on April 1, 1889 with the establishment of municipalities law. Kitatama District was transferred to the administrative control of Tokyo Metropolis on April 1, 1893. Mitaka was raised to town status in 1940.
Mitaka City was officially founded on November 3, 1950. A motion to merge with neighboring Musashino City failed in 1955 by only a single vote in the Mitaka city assembly.
- wikipedia - 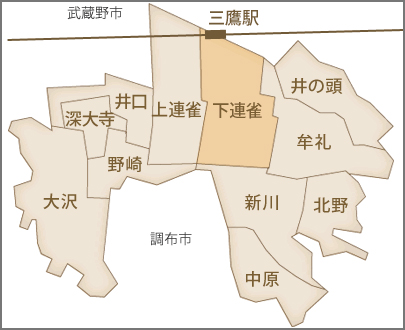 . Inokashira 井の頭 "Head of the Well" .

Shinkawa 新川 Shinkawa sub-district "new river"
新川一丁目 - 新川二丁目 first and second sub-district
in the former Kyobashi area 京橋地域.
The area used to be called 平川 Hirakawa (the former river 元の神田川 Kandagawa), it was an island in the estuary of 八丁堀川 Hatchoborigawa called 江戸中島 Edo Nakashima (Nakajima). During the rebuilding of Edo by Tokugawa Ieyasu, the rivers were relocated and the Shinkawa area developed at the Reiganjima area. 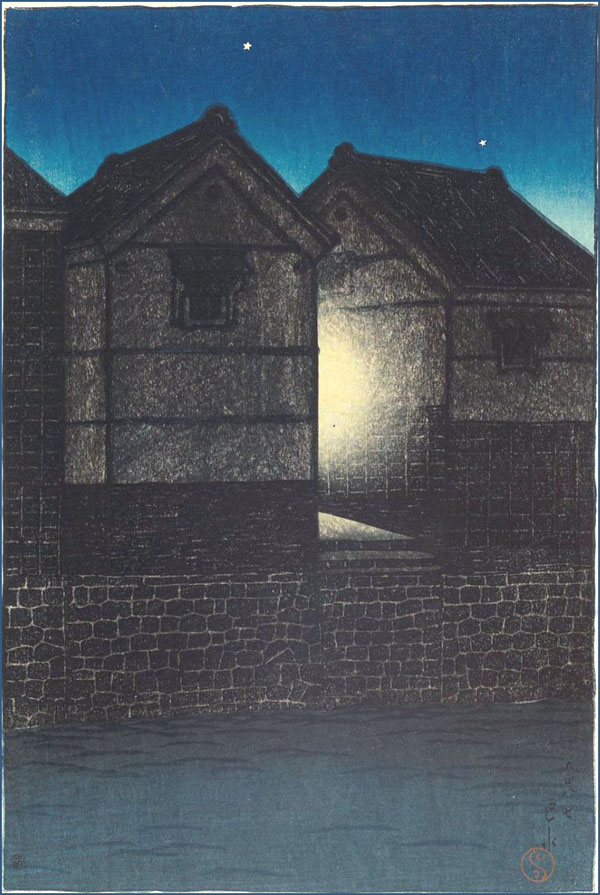