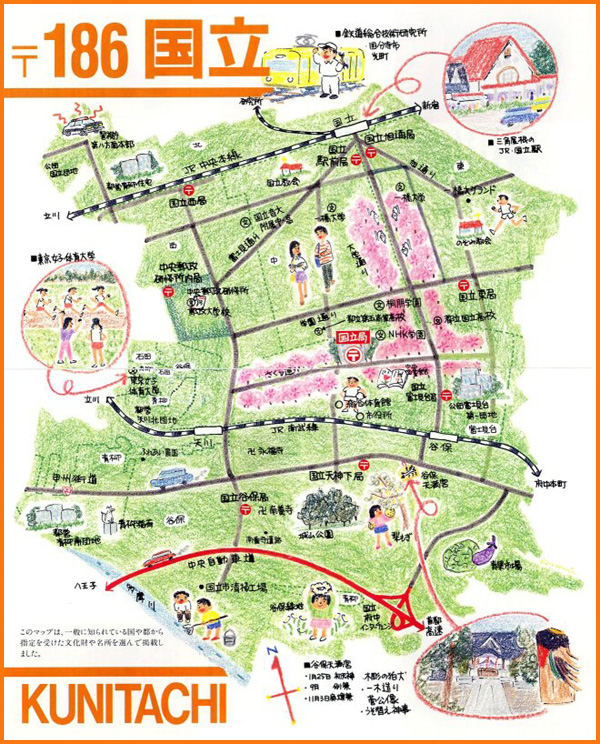 - quote
Kunitachi (国立市 Kunitachi-shi)
is a city located in the western portion of Tokyo Metropolis, Japan. As of 1 February 2016, the city had an estimated population of 75,867, and a population density of 9,310 persons per km². Its total area is 8.15 square kilometres (3.15 sq mi).
Kunitachi is located in the Musashino Terrace of central Tokyo Metropolis. Kunitachi is known for its broad main avenue, Daigaku Dori (University Avenue). This cherry-tree-lined boulevard stretches from Kunitachi Station on the Chūō Main Line toward the banks of the Tama River.
- - - - - History
Kunitachi lies along the historical Kōshū Kaidō, a route that connected Edo with Kofu in the province of Kai (present-day Yamanashi Prefecture).
The modern villages of Yaho, 青柳村 Aoyagi and 石田村 Ishida were created within Tama District of Kanagawa Prefecture during the establishment of the municipalities system on April 1, 1889. The district was transferred from Kanagawa to Tokyo in 1893.
The three villages were merged to form Kunitachi town in 1951. Kunitachi was elevated to city status on January 1, 1967.
- source : wikipedia 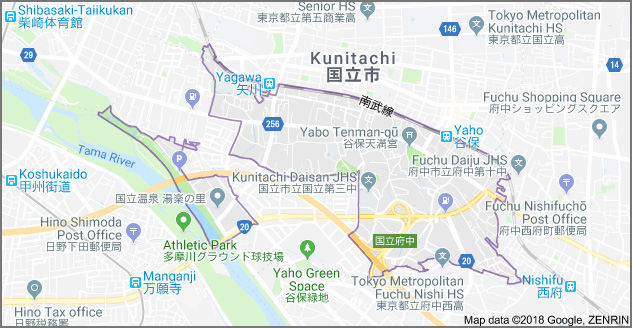 In the 保谷地区 Hoya region of South-Eastern Tokyo there was a bad harvest for a long time and the farmers suffered a lot. So they moved on to this area trying to cultivate new fields. In order not to forget their old home, Hoya, they named the new area Yabo, bus soon changed it to Yaho.
yabo can also be spelled 野暮 and means boorishness, so they changed the reading.
The local shrine is still often called Yabo Tenmangu. 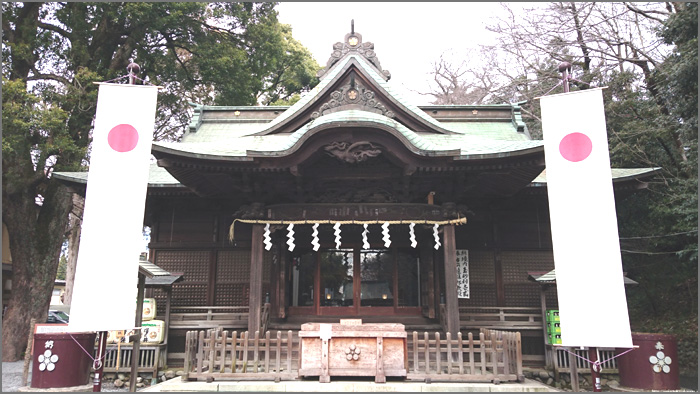 Yabo Tenman-gū claims to be the oldest Shinto shrine in the Kantō region dedicated to Tenjin, the deified Sugawara no Michizane, having been built in 903 AD by Michizane’s third son.
- source : wikipedia -

- quote -
The history of Kunitachi
has its origin in the time when people began to live around Yabo Tenmangu.
A lot of ancient stone artifacts and potteries were found and ancient tombs and shell mounds remain there. Geologically Kunitachi is bordered on the south by Fuchu and on the north by Kokubunji. There was an ancient provincial government office in the Fuchu area. In Kokubunji, there is a ruin of a temple, which is one of the temples constructed by the request of Emperor Shomu in 741. From the names of the cities Fuchu and Kokubunji; “fu” meaning the center of politics and “ji” a temple, we can easily assume that people have started to live in the area, Musashi no Kuni, from a long time ago and Kunitachi has been one of the main regions.
Yabo Tenmangu
is a venerable Shinto shrine dedicated to SUGAWARA Michizane . In about five minutes’ walk from JR Yaho station, you come to see a big shrine gate. Yabo Tenmangu is the oldest among three well-known shrines, Yushima, Kameido, and Yabo Tenmangu. Soon after SUGAWARA Michizane (the god of wisdom) was exiled to Dazaifu, his third son SUGAWARA Michitake was said to be also exiled and lived in Yabo . When his father died, he enshrined a wooden figure of his father in Tenjinjima near Fuchu city in 903, and that is the origin of Yabo Tenmangu, according to the Tenmangu. The ancestors of Michitake began to use a family name Tsunotono. In the Kamakura period, Saburou Tamemori Tsunotono, who was a disciple of Honen (a founder of Jodo-shu), entered the priesthood and became the priest of Yabo Tenmangu. The shrine building was later moved to the present location.
You may wonder
why the son of SUGAWARA Michizane had to be sent to Yabo. That might be because the east part of Japan, where Yabo is located, then was less advanced compared to the western part. Among relatively insignificant regions of the east Japan, Musashi no Kuni was fairly developed and Yabo was the center there.
Yabo Tenmangu
is a precious historical shrine as is described above. The long history of the shrine, more than one thousand years, creates the serene and divine atmosphere around the area, contrasting the bustling of towns in the north of Kunitachi city. There are some festivals hold throughout a year and many people come to join them. For example, about one hundred thousand people pay a visit to the shrine on a new year’s day, after listening to seventy seven times of taiko drumming in a row at midnight. Every year in Kunitachi city, Yabo Tenmangu’s taiko sound signals the beginning of a new year. People walk into the shrine to pray for the peace of the new year. It’s a nice place to stroll around seasonally. You may run into some sweet bantams, which use the shrine as their home. The solemn building of the shrine never fails to captivate your heart.
Yabo was part of Fuchu
until the beginning of the Edo period and agricultural area for people to live in. There were only few affluent farmers who owned the lands and the rest were mostly peasants who worked for them. Now we introduce some seasonal practices and festivals held at home. They have been handed down to generations in Yabo and are all vital parts of the life in Yabo.
- Festivals
1. Cocoon ball decoration on tree (on January 10)
2. Making diamond shaped mochi (on March 3)
3. Boy’s day (on May 5)
4. Summer/Fall festivals, Shishimai (Lion dance) and Buddhist lantern festival (August 25 ～September 25)
5. Full moon night festival (on September 15)
6. Okagarabi (on November 3) fire festival
7. Making Shimenawa (on December 20)
We had a glimpse of some annual events and festivals in Yaho area. Now take a look at how Yaho, the old and historical village of farmers, turned into Kunitachi, a modern town with universities. It was the end of the Edo era and Japan was about to go through dramatic changes in many aspects of our lives in the Meiji Restoration.
- more on this page
- source : kunitachikagen.com...-