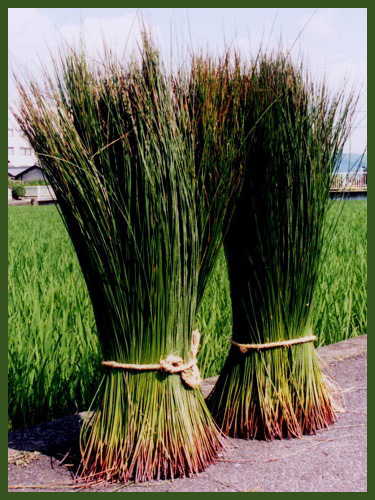 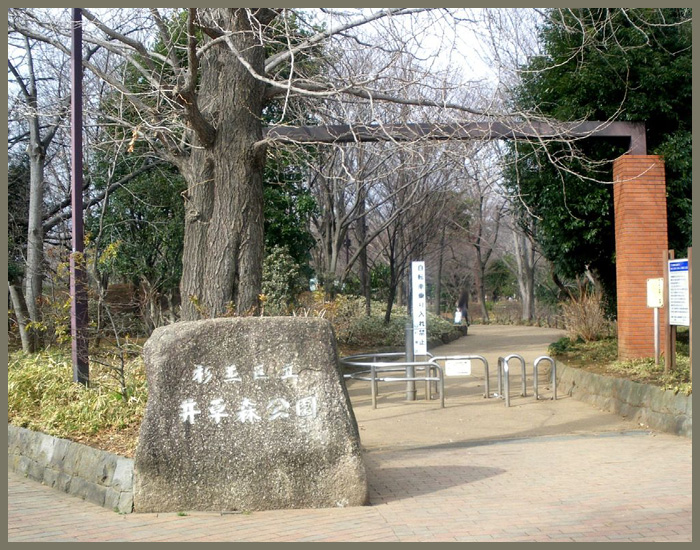 
There are various theories about the name of this village.
1 - The area around 善福寺池 Zenpukuji-Ike pond and 妙正寺池 Myoshoji-Ike pond was a swamp where 藺草 Igusa was growing wild.
2 - ashi 葦 reed was growing in the ponds, then called ike no kusa 池の草. Ikenokusa was then shortened to イグサ Igusa 葦草.
3 - Between the ponds of Zenpuku-Ji and Myosho-Ji there was a grassland. Between pond 池（井）i and soogen 草原 grassland, using the Kanji 井草.
4 - The developer of the area was 長左衛門 Chozaemon, who used the family name 井口 Iguchi. He was also called 草分け長左衛門 Kusawake Chozaemon. kusawake, lit. "dividing the grass and weeds" is a pioneer in farming areas. His familiar name, Iguchi no Kusawake, was then shortened to 井草.

The village started developing, first Kami and Shimo Igusa, around 1644.
Kami-Igusa used to be called 遅野井村 Osonoi mura "slow wilderness well".
This village name comes with a legend of itself.

In 1189, when Minamoto no Yoritomo was on his way to fight the people of Tohoku he passed this area and his soldiers felt very thirsty. They begun digging for water in the ground with their arrows. Finally some water came sprouting out, but very slowly (osoi 遅い). Yoritomo complainde "osoi no" (this is sooo slow)". Eventually this was written as Osonoi.

Igusa village was close to the 青梅街道 Ome Kaido highway. 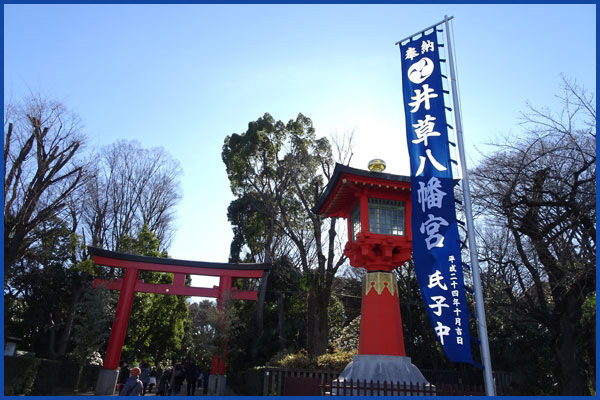 - quote -
Igusa Hachimangu Shrine has many kinds of plants and trees in the spacious compound, including some cherry trees that are very impressive when the blossoms are in full bloom. Cherry trees along the north approach and two huge lanterns welcome visitors.
The shrine is believed to have been founded in around 1190. In front of the main shrine there used to be a red pine tree and black pine tree planted around 1200 by the Shogun Yoritomo Minamoto. Those trees withered but parts of the roots are now exhibited along the corridor of the front shrine. In 1664 Ujinari Imagawa, an influential samurai of this area, renovated the main shrine, and this vermillion-lacquered shrine is the Suginami’s oldest wooden construction and is still preserved within the main shrine.
Igusa Hachiman Shrine
is famous for yabusame that is held every five years. Yabusame is the art of shooting arrows on horseback. When it first started in around 900, it was just a martial art, but later it became a ritual for Shogun families. When they wished to ward off evil spirits or for a new-born baby’s good health, yabusame was performed.
- source : experience-suginami.tokyo/2016/06/igusa-hachimangu... - 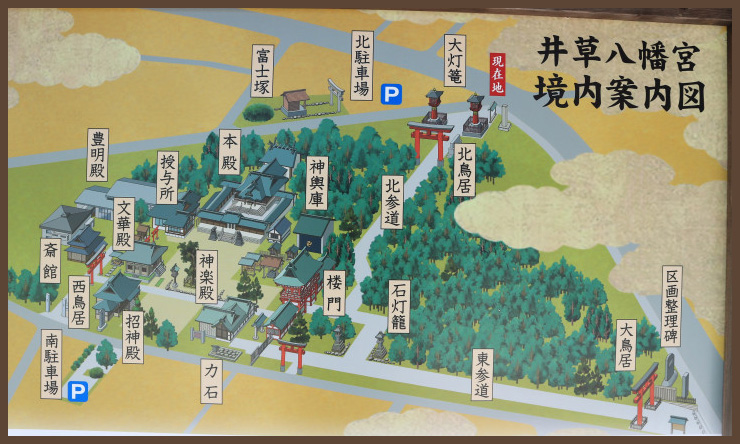 - quote -
Igusa Hachimangu Shrine is a Japanese shrine in Tokyo with a long history. It is said that this shrine was originally built in the Heian Period when samurais had much less power than that of several aristocrats. The Heian period started in 794 and ended about 900 years ago, so Igusa Hachimangu has a really long history.
After the original one was built,
several shoguns prayed for winning the war. For example, Minamoto no Yoritomo did it before his final battle to rule Japan against the enemy force in the northern Japan. Finally he won the battle and found the Kamakura shogunate which means he became the practical ruler of Japan.

The god of Igusa Hachimangu Shrine has some power.
1. Solving troubles around you smoothly and speedily.
2. Giving you an opportunity when you messed up.

Minamoto no Yoritomo defeated the war and was about to die before his battle against the north Japanese.
Are you ready for some sort of “revenge”?
Then Igusa Hachimangu Shrine will give you a special power just like it did for Minamoto no Yoritomo.
- source : tokyoing.net/igusa-hachimangu... -