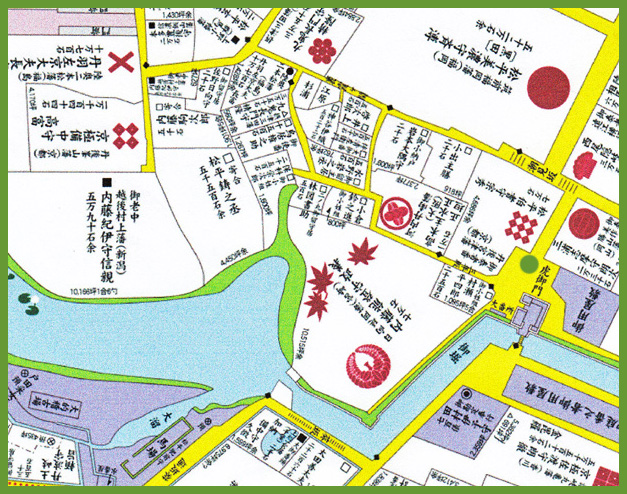 The gate is on the right, with a green dot.

- quote -
Toranomon (虎ノ門) is a business district of Minato ward.
- History
Literally meaning "Tiger's Gate," Toranomon was the name of the southernmost gate of Edo Castle. The gate existed until the 1870's when it was demolished to make way for modern developments.
The Toranomon Incident (虎ノ門事件 Toranomon Jiken) was an assassination attempt on the Prince Regent Hirohito of Japan on 27 December 1923 by communist agitator Daisuke Namba.

The district is home to many corporate headquarters. From the 1970s[ through the mid-1990s Japan Air System (originally Toa Domestic Airlines) was headquartered in the Mori Building (森ビル Mori Biru) in Toranomon. Air China has its Tokyo offices in the Air China Building in Toranomon.[ TV Tokyo,[ Japan Tobacco, Fuji Fire and Marine Insurance, and Mitsui O.S.K. Lines have their headquarters in Toranomon.
The Okura Museum of Art and Hotel Okura Tokyo are also located in Toranomon.
- - - More in the WIKIPEDIA ! 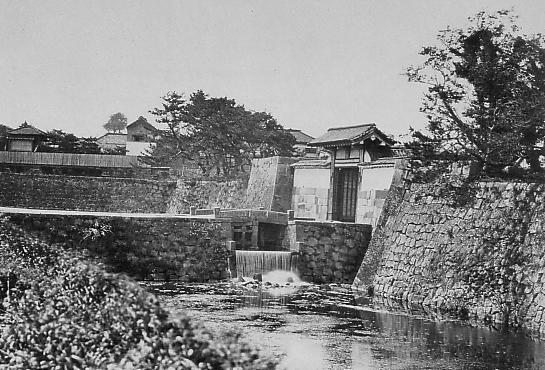 The Toranomon (Tiger Gate), demolished in the 1870s

- quote
Toranomon is an area in Tōkyō that is known to have been named after one of the gates of Edo Castle. The gate and the moat and bridge system that made up the area no longer exist.
It’s based on 四神思想 shijin sōō, a Chinese precept that stated that the 4 seasons and 4 compass directions were controlled by 4 distinct deities.
玄武 genbu the black tortoise, guardian of the north
朱雀 suzaku the vermilion sparrow, guardian of the south
青龍 seiryū/seiryō the blue dragon, guardian of the east
白虎 byakko the white tiger, guardian of the west
Pre-modern Japanese cities, or at least castles and religious buildings, were often laid out according to Chinese principals of 風水 fū sui feng shui and other similar mythologies. This theory states that the 虎 tora tiger is a reference to the White Tiger.

This surprised me because Toranomon is actually the southernmost gate of Edo Castle.
So I did a little more research and I found out that the White Tiger and Blue are considered polar opposites in feng shui. Among other things, the Blue Dragon represents the left-hand side, which the White Tiger represents the right-hand side.
This also seems strange
because if say north is the top and south is the bottom and the southernmost portion of the castle is the “front,” Toranomon is still south (not west) and just a tad to the left. In fact, if we continue this assumption, there is handful of other gates on the “right side” of the castle – including the actual front gate, 大手門 Ōtemon.
..... The gate was demolished/knocked down in 1873 (Meiji 6) but the name continued to be used for the area, in particular the main intersection (many Tōkyō neighborhoods derive their place names from old local landmarks that persist in intersection names that became train station and bus stops in the Meiji and Taishō Eras).
In 1949
the area got the official name 虎ノ門町 toranomon-chō. In 1977, it received an official postal code under the name 虎ノ門 Toranomon.
- source : japanthis.com/2013... 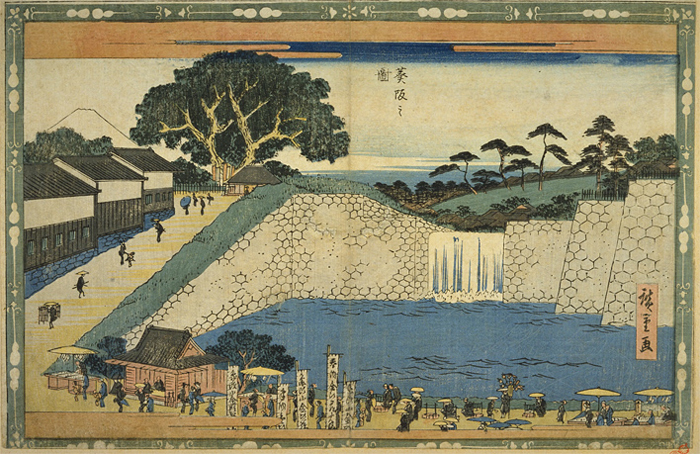 - quote -
Toranomon
Located between present day 港区芝虎ノ門一丁目 Kasumigaseki 1 chome and Toranomon 1 chome and refers to the area around the Tora-no-mon Gate.
There are several theories about the origin of the name Tora-no-mon Gate such as there was a cherry blossom tree called 虎の尾 tora no shippo (tiger's tail) in the residence near the gate.
Another theory is that Ota Dokan named the gate for the historical fact of the tiger when he went off to war, and also a theory which said that when they tried to bring in a tiger gifted from Korea, the cage was too big to pass through the gate and they rebuilt it.
The state of water over the floodgate and flowing into the cistern, 葵坂 Aoi-zaka Hill and 金刀比羅宮 Kotohira-gu Shrine was often painted in nishiki-e.
- source : National Diet Library - 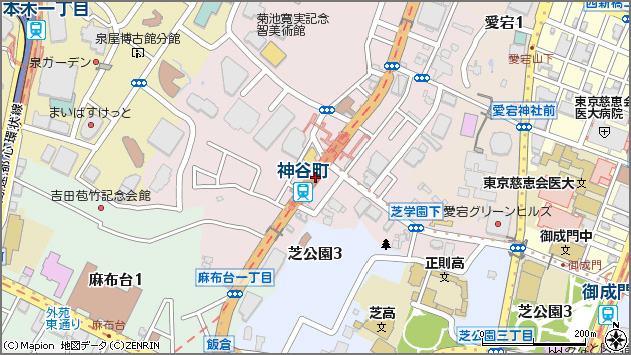 Around 1614, the layout of Edo city was more or less shaped.
The living quarters of Bakufu officials (temawari 手廻, 中間 chuugen, 御小人 okobito .. others see below) were located in Asabu.
The area of official living quarter (kumiyashiki 組屋敷) was moved to Nichikubotachoo 西久保田町 Nishi-Kubota.
In 1696, the Machibugyo Governor of Edo decided there ware too many place named with TA 田 "field" and re-named the district after the place of origin of the Temawari group.
(also called 御手廻（おてまわり）仲間（ちゅうげん） O-temawari chugen)
They had come from 三河の国 Mikawa no Kuni (now Aichi) 八名郡 Yana district 神谷村 Kamiya mura village. So he named the area Kamiya cho.
Later other townspeople came to live here too.


- quote -
Kamiyacho
Served by Kamiyacho Station on the Tokyo Metro Hibiya Line, Kamiyacho is a predominantly business neighbourhood wedged between Roppongi and Toranomon within spitting distance of Tokyo Tower. Despite the lack of families, there are plenty of family restaurants in Kamiyacho.
There are also the usual chain food/coffee places like Sukiya and Doutor.
- source : tokyocheapo.com/locations/central-tokyo ...- 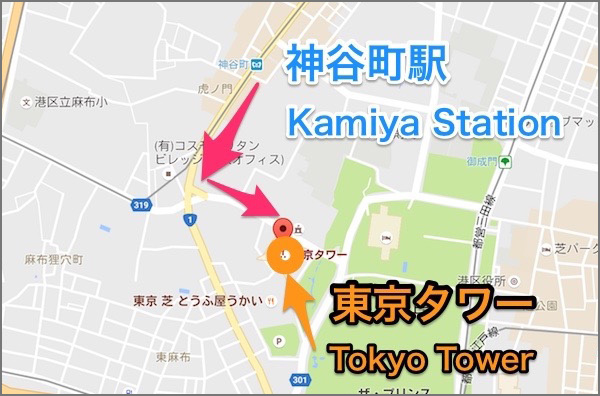 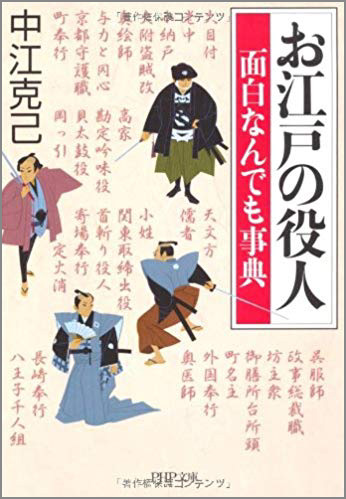 - quote -
Edo goyaku 江戸五役（ごやく） the five official worker groups of Edo castle
Positions for lower Samurai, involving for example cleaning and keeping the castle of Edo and its gardens clean.
The character 御 o expresses respect for the group.

御駕籠之者 okagonomono, o-kago no mono
They had to look after the kago 駕籠 palanquins for the Shogun and his heirs. (They were the private taxis of their time.)
They were divided in three groups. Each group had a special leader and about 30 members at the time of Tokugawa Ieyasu. They had special black hanten 半纏 jackets and were all rather large and strong in stature.
In 1616 they had three living quarters in 本郷湯島 Hongo Yushima. The area was called 駿河町 Suruga cho but then re-named to 三組町 Mikumi cho, District of the three groups.
In 1663, a fourth living quarter was established in 本所四つ目 Honjo Yotsume.
In 1772 after 明和の大火 the Great Fire of Meiwa the three quarters were relocated to 本郷春木町 Hongo Haruki cho. The quarter at 本所四つ目 Honjo Yotsume was relocated to 谷中の七面前 Yanaka and later to 巣鴨 Sugamo.
In 1790, the quarters were relocated to 四谷鮫ヶ橋 / 鮫河橋 Yotsuya Samegahashi.


御中間 ochuugen, o-chugen
They were responsible for the securtity of the castle, including the Women's quarters in Oku and the kitchen.
There were about 550 people, divided in 大中小 three groups.
The first group, 大組, had 4 leaders, the 中組 middle and 小組 last group had 3 leaders and 4 workers.
There were many sub-groups :
中間からの出役として、旗御指之者・御持鑓之者・御馬髪巻役（おうまのかみまきやく）・扶持賄・御供組頭・御中間目付・御使之者・御番・大奥塀仕切戸番・大奥御長屋門番・大奥締戸番・御太鼓櫓下土戸番・西丸御長屋門番・西丸御納戸口番・奥表仕切戸番・二の丸御長屋門番・二の丸御台所脇門番・西丸下御用屋敷門番・御厩定番・御広敷門番などがあった。


御小人 okobito, o-kobito
"The honorable "little people".
They were responsible for the security of the women's quarters, more than 500 were working. 10 people had to look after the robes of the Shogun. 2 had to hold the horses. One had to hold an umbrella, one had to prepare the sandals at the exit and more such small jobs.
小馬験役之者・亀井坊・御長刀役之者・御小道具役之者・扶持賄・御使組頭・草履取・御小人目付・西丸御小人目付・御日傘持・御小人押・御玄関番・西丸御玄関番・中之口番・西丸中之口番など。
They were divided into three groups 小人組, each with a leader.
Toward the end of the Edo period, their living quarters were at 本郷金助町 Hongo Kinsuke cho and 湯島切通 Yushima Kiridoshi.


黒鍬之者 kurokuwa no mono
"The men with the black hoes". 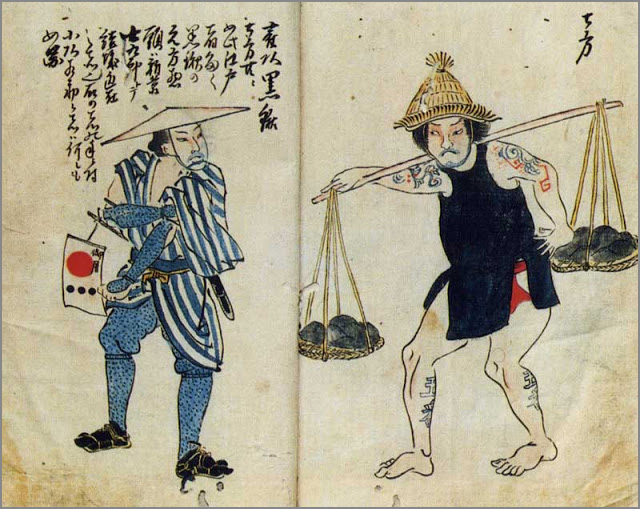 They were responsible for the cleaning and upholding the buildings, canals and waterways.
There were about 430 men in three groups with leaders.
They had special hoes, wider and stronger than usual and shorter handle, to make them easy to hit the ground.
These hoes were first made by 尾張の大野鍛冶 the blacksmiths in Owari 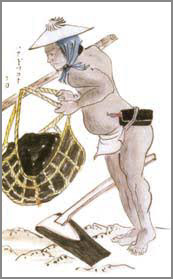 
御掃除之者 go soji no mono
"The Cleaners" of various parts of Edo castle and the Shogun's places in Edo.

They were also running various errands and shopping. They usually wore white work robes.
There were about 200 working in 3 groups, with leaders. In times of illness they were released from their job and free to seek medical help on their own. When healed they could again apply for the job.
They were under the supervision of a 目付 Metsuke supervisor.

Momijiyama sooji no mono 紅葉山掃除之者 cleaners of Momijiyama
Momijiyama was the official graveyard of the Shogun in Edo. First there were only 10 people, later they grew to more than 70. 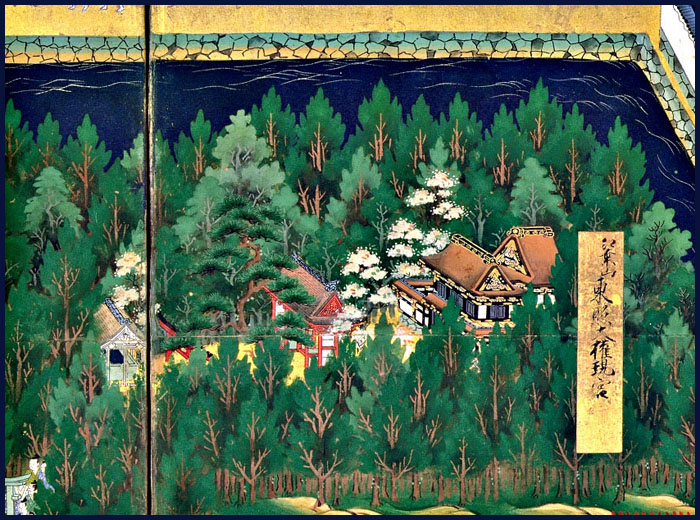 Momijiyama "Maple Mountain" is located in the Northern part of Nishinomaru. There were various Shinto shrines to venerate the Shoguns. 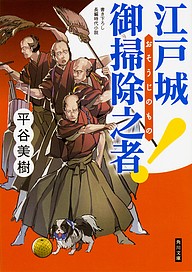