- quote
The 36 Gates of Edo Castle
Edo (Yedo) Castle, constructed in 1457, transformed Tokyo (then called Edo) from a small fishing village into an urban center for trade, culture, and politics. Edo Castle became the official residence of the Tokugawa shogun who ruled Japan from 1603 to 1867. Upon the shogun’s arrival in 1603, the castle was in shambles, requiring an extensive 40 year reconstruction project. The castle was upgraded to be an appropriate residence for the shogun as well as an administration center for a unified Japan.
At the time, it was the biggest castle in the world with a defensive perimeter of over 10 miles comprised of an inner and outer moat. The moats were crossed by 36 gates or watchtowers, each heavily guarded. In 1868 the Tokugawa shogun’s power toppled and the emperor was restored to the supreme ruling position, ending the feudal era and ushering the modernization of Japan. Emperor Meiji resided at the castle from 1868 to 1888 before moving to the newly constructed Imperial Palace. Unfortunately, there is little that remains of the original castle structure today. Much of it had been destroyed due to fires and earthquakes, including most of the gates. The remnants are currently being preserved as historical landmarks. 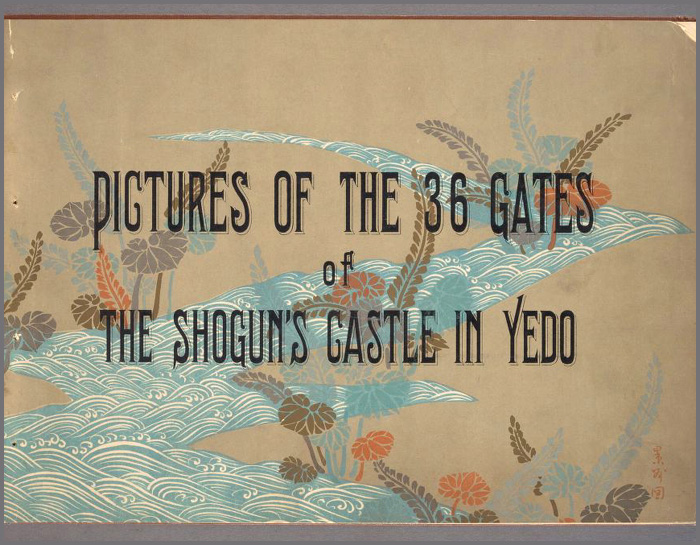 This extravagant publication at the end of the 19th century tried to capture the magnificence of the gates for tourists and historians alike. Each of the 36 gates is depicted in color with an accompanying historical description.
- source : blogs.harvard.edu/preserving...

- quote -
Gates
The inner citadels of the castle were protected by multiple large and small wooden gates (mon), constructed in-between the gaps of the stone wall.
Not many are left today. From south to southwest to north, the main gates are at Nijūbashi, Sakurada-mon, Sakashita-mon, Kikyō-mon, Hanzō-mon, Inui-mon, Ōte-mon, Hirakawa-mon and Kitahanebashi-mon.
Only the stone foundations of the other gates (meaning the gap left in between the large stone walls for the wooden gates) are still preserved. Large gates, such as the Ōte-mon, had a guard of 120 men, while the smaller gates were guarded by 30 to 70 armed men.

An eye-witness account
is given by the French director François Caron from the Dutch colony at Dejima. He described the gates and courts being laid out in such a manner as to confuse an outsider. Caron noted the gates were not placed in a straight line, but were staggered, forcing a person to make a 90 degree turn to pass on to the next gate. This style of construction for the main gates is called masugata (meaning "square"). As noted by Caron, the gate consisted of a square-shaped courtyard or enclosure and a two story gatehouse which is entered via three roofed kōrai-mon. The watari-yagura-mon was constructed at adjacent angles to each side within the gate.
All major gates had large timbers that framed the main entry point and were constructed to impress and proclaim the might of the shogunate.


The Hanzō-mon (半蔵門) Hanzomon is a gate in the kōrai style. The old gate was destroyed by fire during World War II. The Wadakura Gate was moved here in its stead.
The Hanzō-mon is the only gate to the Fukiage area from outside today. 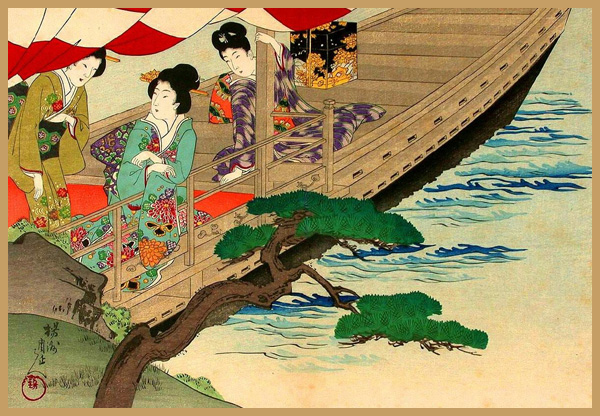 The Inui-mon (乾門) was in the Nishinomaru area next to today's headquarters of the Imperial Household Agency and called Nishinomaru Ura-mon. It was moved to its present location between the Kitanomaru and Fukiage garden in the Meiji era. It has its name because it was in the northwestern part of the Imperial Palace grounds.

Kikyō-mon 桔梗門 Kikyo-Mon - see below
One of the few gates left of the Ninomaru is the kikyō-mon, which is also known as the Inner Sakurada-mon, as opposed to the (Outer) Sakurada-mon in the south. The architecture of the tower is a gate and in the kōrai style.

Kitahanebashi-mon 北桔橋門, "Northern Drawbridge Gate" is the northern gate to the Honmaru ward, facing Kitanomaru ward across Daikan-cho street. It is also constructed as a masu-gate just like Ōte-mon and Hirakawa-mon, and has a watari-yagura-mon in a left angle. The bridge in front of the gate, which was once a drawbridge during the Edo period, is now fixed to the ground. The metal clasps used to draw the bridge are still attached to the roof of the gate.

Sakashita-mon 坂下門  originally faced the north, but was changed to face the east in the Meiji era. This tower gate overlooks Hamaguri-bori. The assassination of Andō Nobumasa, a member of the shōgun's Council of Elders, occurred outside this gate. 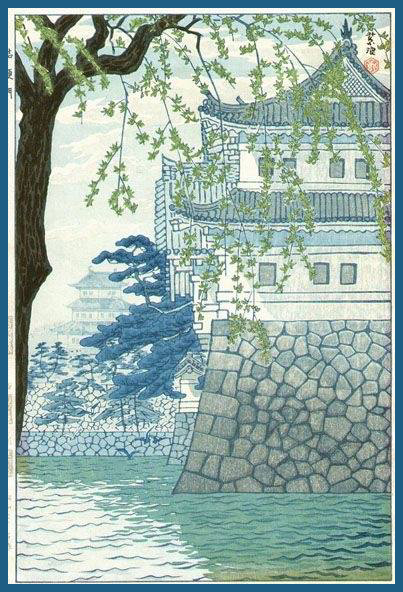 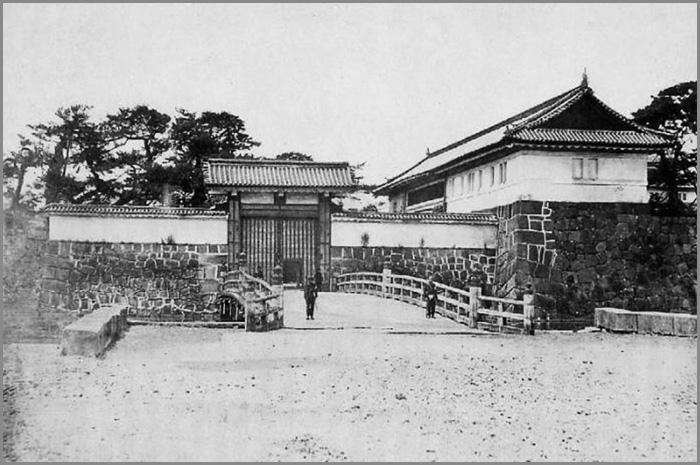