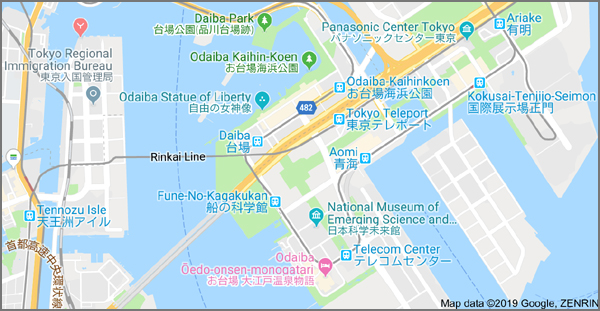 - quote
Odaiba (お台場) is a large artificial island in Tokyo Bay, Japan, across the Rainbow Bridge from central Tokyo. It was initially built for defensive purposes in the 1850s, dramatically expanded during the late 20th century as a seaport district, and has developed since the 1990s as a major commercial, residential and leisure area. Odaiba, along with Minato Mirai 21 in Yokohama, is among a few manmade seashores in Tokyo Bay where the waterfront is accessible, and not blocked by industry and harbor areas. For artificial sand beaches in the bay, Sea Park in Kanazawa-ku is suitable for swimming, Odaiba has one, and there are two in Kasai Rinkai Park area looking over to the Tokyo Disneyland.
Daiba (台場)
formally refers to one district of the island development in Minato Ward. Shintaro Ishihara used Odaiba to refer to the entire Tokyo Waterfront Secondary City Center (東京臨海副都心 Tōkyō Rinkai Fukutoshin) which includes the Ariake and Aomi districts of Kōtō Ward and the Higashi-Yashio district of Shinagawa Ward.
The name Odaiba comes from a series of six island fortresses constructed in 1853 by Egawa Hidetatsu for the Tokugawa shogunate in order to protect Edo from attack by sea, the primary threat being Commodore Matthew Perry's Black Ships which had arrived in the same year. Daiba in Japanese refers to the cannon batteries placed on the islands.
In 1928, the Dai-San Daiba (第三台場) or "No.3 Battery" was refurbished and opened to the public as the Metropolitan Daiba Park, which remains open to this day.
..... The modern island of Odaiba began to take shape when the Port of Tokyo opened in 1941. .....
..... The area started coming back to life in the late 1990s as a tourist and leisure zone, .....
..... Odaiba is one of the venue locations in the upcoming 2020 Summer Olympics.
The events to be held there under the venue plan include beach volleyball at Shiokaze Park, triathlon and marathon swimming at Odaiba Marine Park, and gymnastics at a new gymnastics venue.
- more
- source : wikipedia

- quote -
Odaiba, modern town, classic eco-friendly ideas
Located on the shore of Tokyo Bay mainly on reclaimed land, the Odaiba area is one of Tokyo's newest neighborhoods. It is also the capital's newest tourist hotspot, luring over 37 million visitors each year with its modern shopping and entertainment attractions. But this new section of town has roots that go way back: The earth-friendly traditions of the Edo period (1603-1868) are carried on to this day in Odaiba, an area where being kind to the environment is a way of business and life.
..... A Place Both New and Old
..... Taking It Easy on the Earth
..... Centuries of Recycling
In 1603 Tokugawa Ieyasu, who had consolidated his rule over all Japan three years earlier, took up residence in his castle in Edo, making the town Japan's political center. The population of the city grew sharply, and by the early eighteenth century Edo was home to over a million people. But despite its status as one of the world's largest cities, contemporary documents describe this metropolis as a beautiful, trash-free place. Laws forbade the discarding of garbage in rivers. Trash was brought to collection centers located around town and disposed of systematically. This garbage became fertilizer for vegetable fields and made its way back to the tables of Edo inhabitants - a total recycling society of the sort that Odaiba aims to be today. 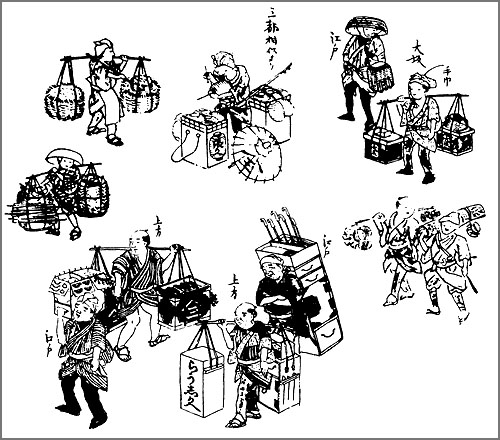 Sewage systems in old Edo
were the most advanced in the world. Night soil was a valuable commodity, collected by traders who brought it to farmers for use as fertilizer and returned to town with vegetables for sale. There was also a booming market in second-hand goods, with craftsmen gathering old clothes, umbrellas, and such, repairing them, and selling them for reuse; cloth was an especially valuable commodity, and kimonos were taken apart, resewn, and used for generations. This conscientious reuse of goods is yet another practice mirrored in Odaiba today.
Tokyo Bay is today
ringed with "islands of trash" - like Odaiba, reclaimed land built on landfills and developed for industrial or residential use. Soon after the end of the Edo period these shoreline areas were being outfitted with piers for shipping, and in the twentieth century their use as waste-disposal sites was in full swing. Odaiba, today the most popular of these reclaimed shoreline spots, rests atop earth removed from construction sites and the wreckage of old buildings. The town itself is built on a base of recycled material. In more ways than one, recycling is providing the foundation for the boom of the new city center in Odaiba and the new lifestyles that are taking form there. Look closely at the modern bustle of the businesses and pleasure-seekers in Odaiba: You can see a long history of recycling and reusing resources if you know where to look.
- source : web-japan.org/tokyo/know/odaiba... -

Since many salt merchants lived here, it was also written
塩留 Shiodome.

- quote -
Shiodome (汐留) is an area in Minato, Tokyo, Japan, located adjacent to Shinbashi and Ginza, near Tokyo Bay and the Hamarikyu Gardens. Formerly a railway terminal, Shiodome has been transformed into one of Tokyo's most modern areas. It is a collection of 11 tiny town districts or cooperative zones, but generally there are three main areas:
-- The Shiodome Sio-Site (シオサイト),
a collection of skyscrapers containing mostly businesses, hotels, and restaurants. Its thirteen skyscrapers house the headquarters of All Nippon Airways, Dentsu, Fujitsu, JSR, Mitsui Chemicals, Nippon Express, Nippon Television, Sega Sammy Holdings and Softbank.
-- The western district, located west of the JR tracks and populated by European-style buildings.
-- The southern extension, east of the JR tracks from Hamamatsucho 1-chome. This area is for residential use, and there are three tall apartment buildings located there, along with a small park.
- - - History
Like its neighbors Ginza and Tsukiji, Shiodome is built on what was originally marshland on the shore of Tokyo Bay. Shōgun Tokugawa Ieyasu issued an order in 1603 to fill in the area, and throughout the Edo period Shiodome housed the local residences of various daimyōs (feudal lords).
The name Shiodome, which translates to "keeping out the tide", probably referred to the shōgun's desire to isolate Edo Castle (now the Imperial Palace) from Tokyo Bay.
There was a Shiodome River but it has been largely filled in.
- more
- source : wikipedia - 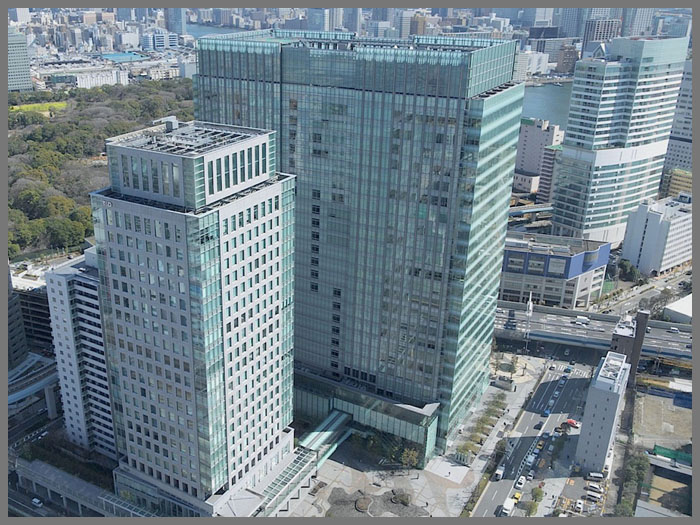 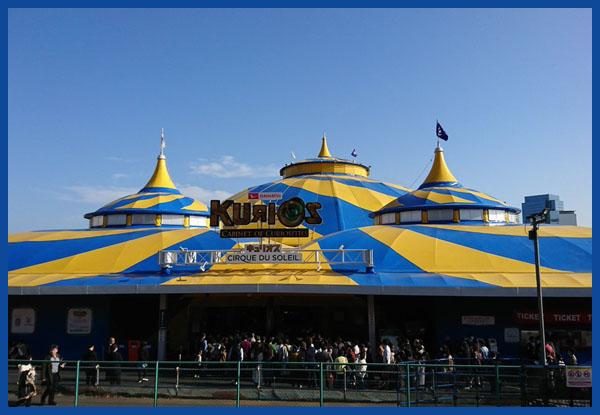 the circus
has come to Odaiba -
rain on cherry blossoms
Tr. Gabi Greve