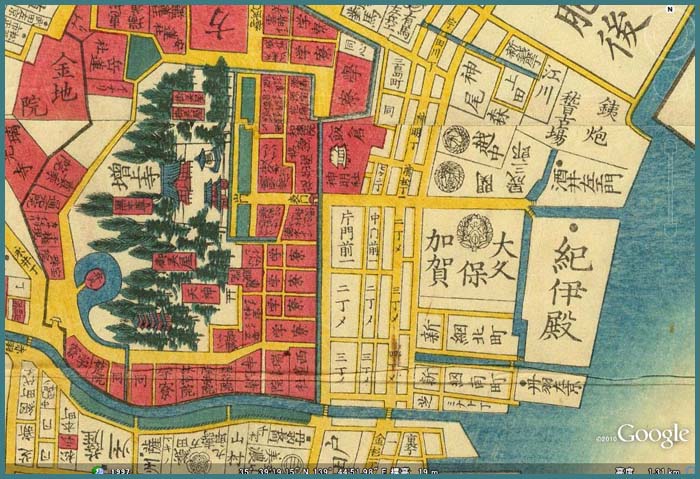 - quote -
Shiba (芝) is a district of Minato, Tokyo, Japan, located near Hamamatsucho and Tamachi Stations on the Yamanote Line and Mita Station on the Toei Mita Line.
Shiba was a ward of Tokyo City from 1878 to 1947, consisting of a number of districts including Hamamatsucho, Mita, Shiba, Shinbashi, Shirokane, Takanawa and Toranomon.
Shiba is the location of Zōjō-ji temple, the Great Main Temple of the Chinzai sect of Shingon Buddhism.
Shiba is also the location of the main Minato Ward office.
- source : wikipedia - 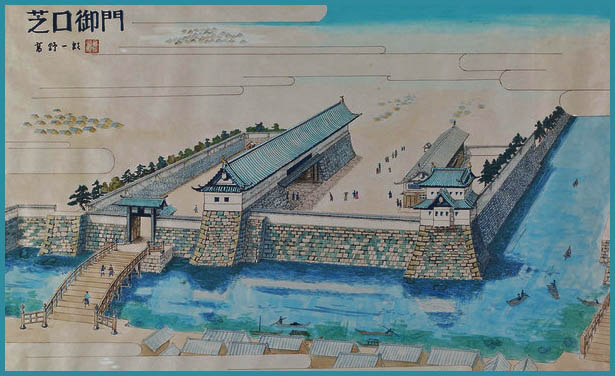 The gate 芝口御門 Shibaguchi Gomon, an outpost of Edo castle, was erected in 1616, now the district South of 田町 Tamachi station.
This gate was jokingly called 日暮の門 Higurashi no mon, because people could sit there all day and enjoy the view over Edo bay to the distand mountains of Chiba.
The gate was later relocated in 1710, as suggested by Arai Hakuseki, at the time of the 6th Shogun, 徳川家宣 Tokugawa Ienobu. It was built to show the grandeur and power of Japan to the frequent embassies from Korea. But the gate buildings burnt down 15 years later.

The region to the south of Shiba is called 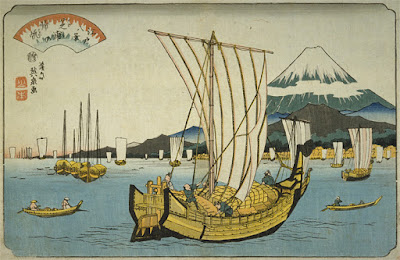 In 1486, there is a reference to an area called 芝ﾉ浦 Shiba no ura. This place name uses the “grass/lawn” kanji and not the “brushwood” kanji.
The area is noted for salt production and shipping

The Shiba clan 斯波氏 Shiba-shi
The clan claimed descent from the Minamoto Yasuuji and the Seiwa-Genji.
- - - More in the WIKIPEDIA !

. the Shibaura abattoir .
and the Eta, the untouchables of Edo 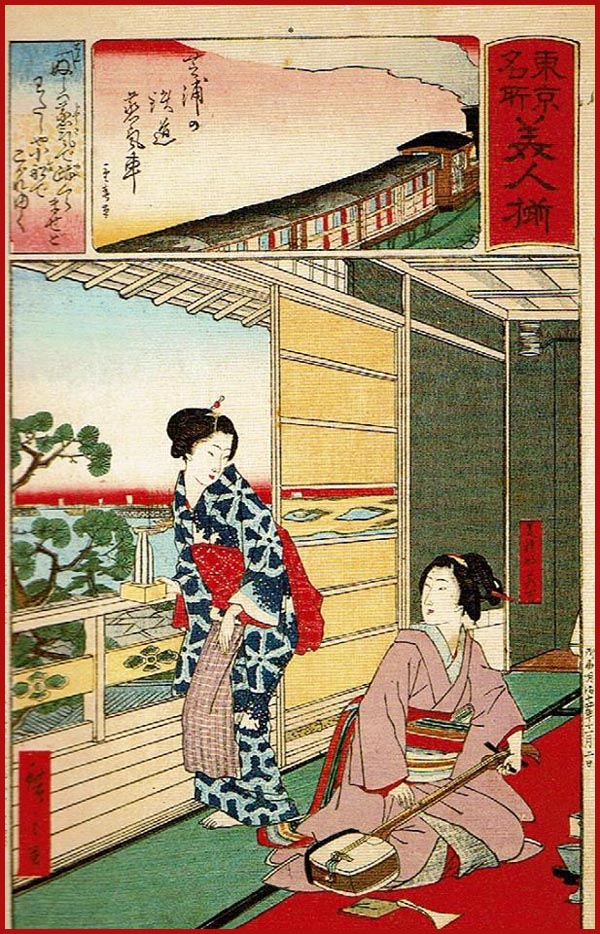 The second theory is that the 斯波氏 Shiba clan had a residence in the area. During the Ashikaga shōgunate, the Shiba were one the families that could hold the position of 管領 kanrei deputy shōgun (literally controller). While the family line came to an end in the mid 1500’s, it’s not impossible to imagine that some member of the Shiba family had a residence here. However, there doesn’t seem to be any collaborating evidence for this theory.

Another theory is that in the early days, when there were many shallow inlets cutting in to what is now central Tōkyō (and this part of town was literally part of the bay, the area was characterized by brushwood used to grow and harvest 海苔 nori seaweed. The general word for brushwood is 柴 shiba*. As far back as the Sengoku Period, we know there to have been a 柴村 Shiba Mura Shiba Village in the area. In the early Edo Period, 柴町 Shiba Machi Shiba Town is attested. The name change reflects an area whose population had grown substantially.
In the early Edo Period we start to see an alternate writing as 芝町 Shiba Machi.
Over the course of the Edo Period, this new variation becomes the standard and the old variant dies out. Products developed in the area develop a widespread reputation as “Shiba Machi” products – like a brand name. 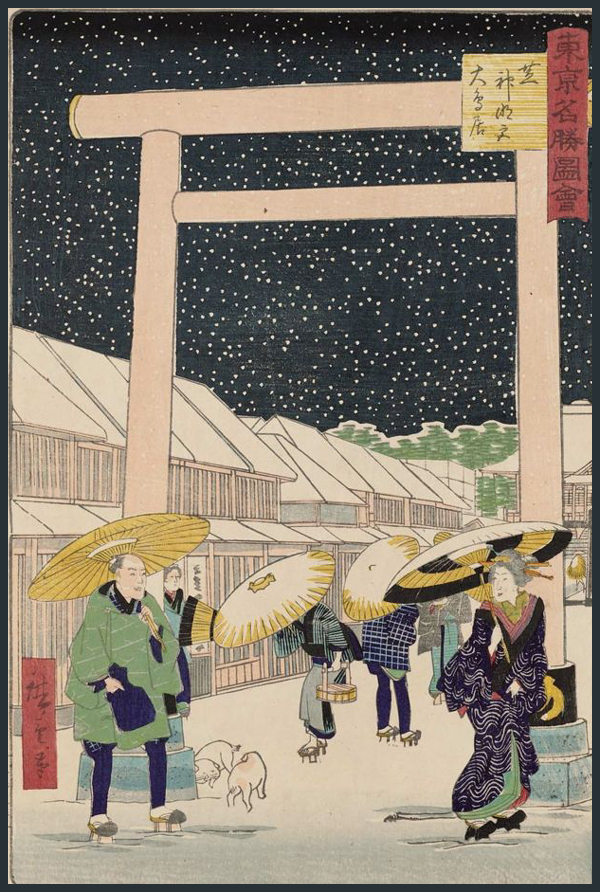 - quote
Shiba - A Port District
Edo is criscrossed by rivers, moats and canals, laid out in a regular grid. In fact, the network of canals is much more organized than the narrow and rambling streets. For this reason, the most efficient means of transportation within the city, especially for heavy goods, is by boat. All of the major rivers and canals are bustling with boat traffic, and some people -- particularly fishermen and people who own barges (takase-bune) -- practically live on their boats. In fact, many people have referred to Edo as the "Venice of the East".

Edo can generally be divided into two main areas, a hilly plateau to the north and west, and a low-lying area crisscrossed by rivers and canals. Most of the daimyo and other nobles or government officials live on large estates in the hilly part of the city. This area is called the Yama-no-te (mountain's fingers), referring to the many lines of hills that run towards the coast. This area could be considered the "suburbs" of Edo, although many of these suburbs are quite close to the center of town.

On the other hand, the waterfront area of the city is where most of the common people live. This part of town is called shita-machi, which means "the lower town" or "downtown". About two-thirds of the population of Edo lives and works in the shita-machi area. Much of the land in this area was reclaimed from the bay, and rivers and canals break the area up into hundreds of separate neighborhoods, or "towns" (machi).

Each of the towns is a largely self-contained community, with its own local government and local leaders. Each machi (town) is administered by a group of local leaders called the machi-toshiyori (town elders), who are selected by a democratic vote. Everyone who owns property in the district is allowed to vote. Although the lower-class people who rent their homes do not get a vote, this system provides a certain amount of democratic political power to the people of the city, at least those in the middle class.

Although the Kanto region is one of the most fertile areas in Japan, prior to 1600 it was only sparsely populated. The area where downtown Edo is now located was covered by tidal flats, marshes, and silty islands on the shores of Edo Bay. Apart from a few fishing villages along the shore, the land was not really suitable for habitation. However, when the first Shogun, Tokugawa Ieyasu, established his capital here, one of the first things he did was to reclaim this broad area of marshes, to serve as the site of a new city.

An army of workers dug canals and moats, and leveled a few small hills, using the excavated earth to fill in these mudflats. The flat, hard-packed land was in an ideal location for a commercial district. It was at the head of the bay, and straddled a major river (the Sumida river), providing for good transportation both by sea and to inland areas further upriver. The many canals provided a convenient transportation network within the city, while the ports along the shore allowed the Shogun to ship in materials and goods into Edo from all over the country. Before long, the mud flats had disappeared completely and in their place was a busy, bustling town.

One of the first large-scale canals built by the Tokugawa Shoguns after they established their capital in Edo was the 道三堀 Dosan-bori (Dosan canal), which runs from Edo bay through the Shiba district, and up to the forecourt of the Shogun's palace. This broad waterway was used to carry all the huge stones and other materials that were used to build Edo Castle, and it continues to serve as a main route for transporting goods to the Shogun's court. For this reason, the Shiba district remains one of the three main port districts in Edo. Although Shiba is not quite as busy as nearby Tsukiji, or the major port of Minato, near Nihonbashi, it nevertheless handles a large volume of ships carrying many of Edo's most essential goods and foodstuffs from all over Japan.

Edo has been the largest city in Japan since the late 1600s. The population has soared since it became the Shogun's capital city. However, before the Tokugawa Shoguns moved to Edo, the two main cities were Kyoto and Osaka, in western Japan. Even today, most commerce, farming and manufacturing activity is concentrated in the area of western Japan, around Kyoto, Nara and Osaka. Therefore, most of the high-quality goods and a fairly large portion of the food consumed in Edo is shipped to the city from Western Japan. Because of the tremendous demand created by the one million people living in Edo, thousands of ships are needed to ship in all of the goods that the city consumes.

The traders and wholesalers of Sakai (Osaka), who control most of the shipping in Japan, have become extremely wealthy from this trade. Although merchants are considered the lowest of the social classes, the leading Osaka merchants rank among the richest families in the country. Their wealth has made many of these traders very important people. To meet the tremendous demand from people living in Edo. the ships owned by the Osaka merchants are constantly sailing into and out of the ports, bringing goods from all areas of the country. The barges and ships that fill the city's waterways are the lifeblood of commerce. Therefore, major port districts like Shiba, are crowded and bustling places.

In the dock area, workers rush to and fro unloading a multitude of different goods from the boats tied up at the docks. Purchasing agents from the wholesale "companies" negotiate with the ship owners as they watch the dock workers and unload their cargoes. They keep careful accounts of the cargo unloaded. In most cases, money does not change hands when ships are unloaded. Instead, the seller and the buyer exchange lists of the cargo delivered. These lists are stamped with the hanko (ink stamp) of both parties, and serve as a formal contract. The seller can collect payment later, by simply showing the stamped list of the cargo they delivered.

Usually, the cargo unloaded at a major port like Shiba is immediately shipped to other parts of the city by cart or barge. For example, that group of workers over there is unloading a boatfull of melons. The fruit will be taken by barge to one of the wholesale markets in Edo and sold to smaller fruit vendors. These vendors will then carry the fruit to their shops and sell it to consumers, or they may carry it through the streets selling it to passers-by.

In addition to the cargo ships tied up at the docks, there are also many watashi-bune (ferries) and pleasure boats sailing to and fro, offering travelers a ride through the city canals. Some of these boats even serve food to passengers, sort of like "floating restaurants". I have a friend who works as a ferry boat pilot in this district. If you are interested, we can hitch a ride with him to his home village, on a small island in Edo bay.
- source : Edomatsu


. hori 堀 moat and districts with this name . 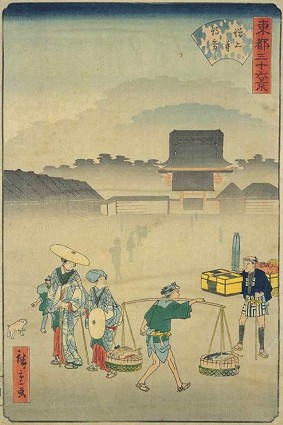 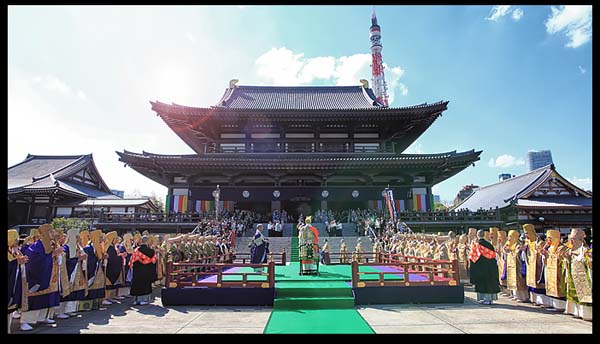 ..... Daiden (Hondo), which forms the core of the Buddhist structures of Zojoji, was rebuilt in 1974 by combining the traditional Buddhist temple architecture with a cream of modern architecture.

nishimuki Kannon bosatsu 西向聖観世音菩薩 Kannon facing West
When the temple Sojo-Ji was relocated here in 1598, this statue of Kannon, made in the Kamakura period, had already been here. 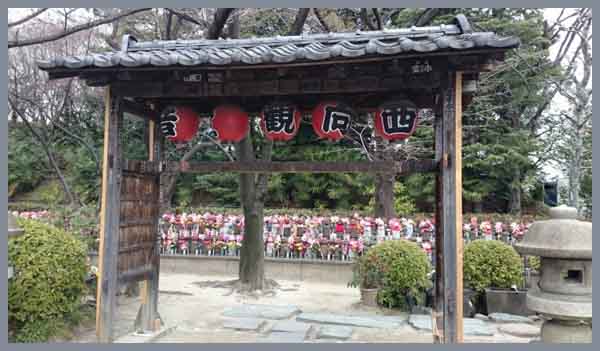 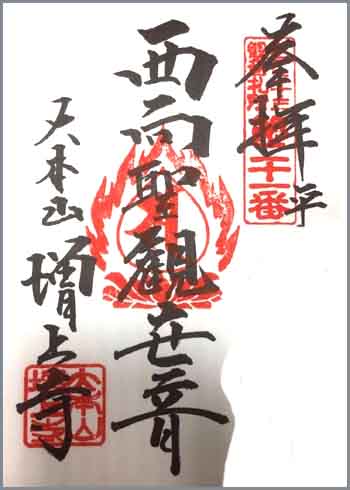 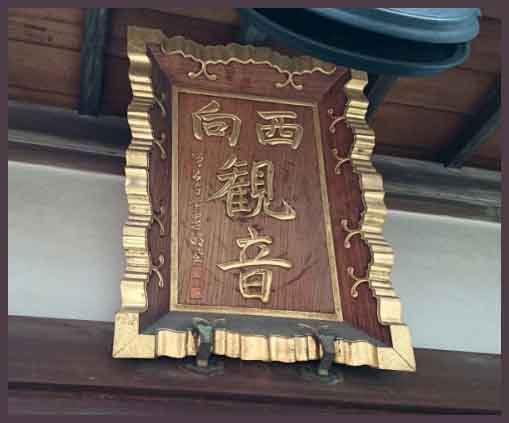 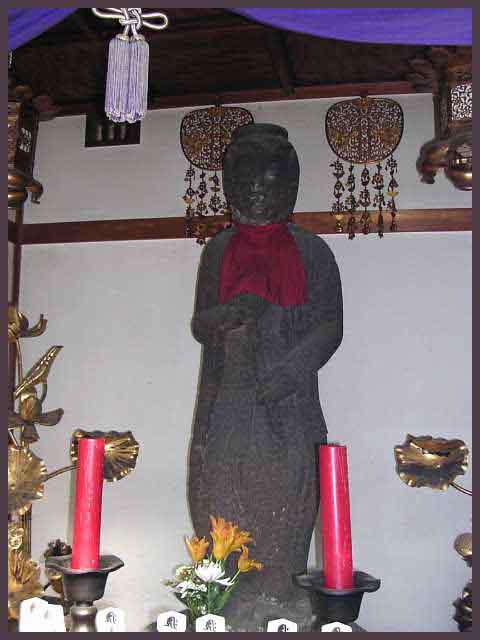 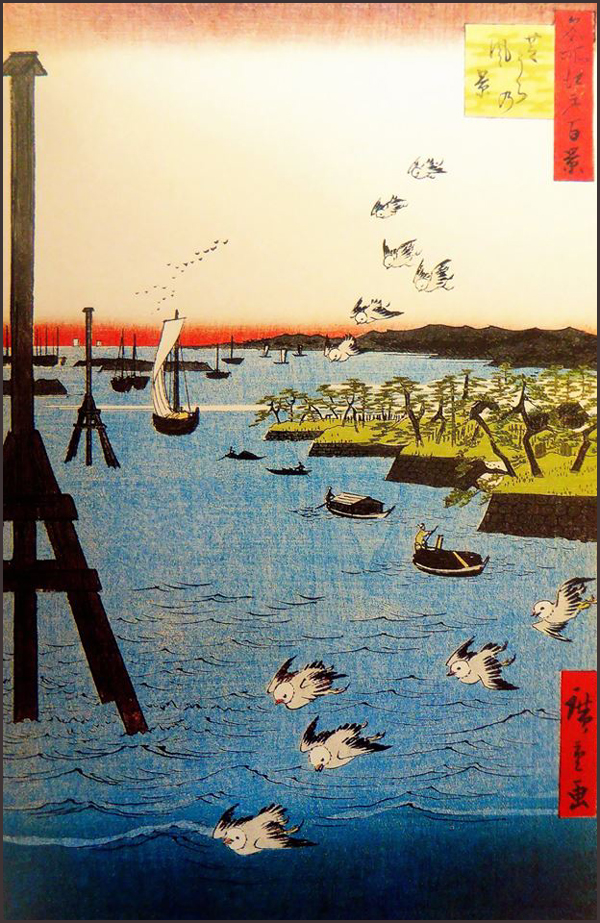 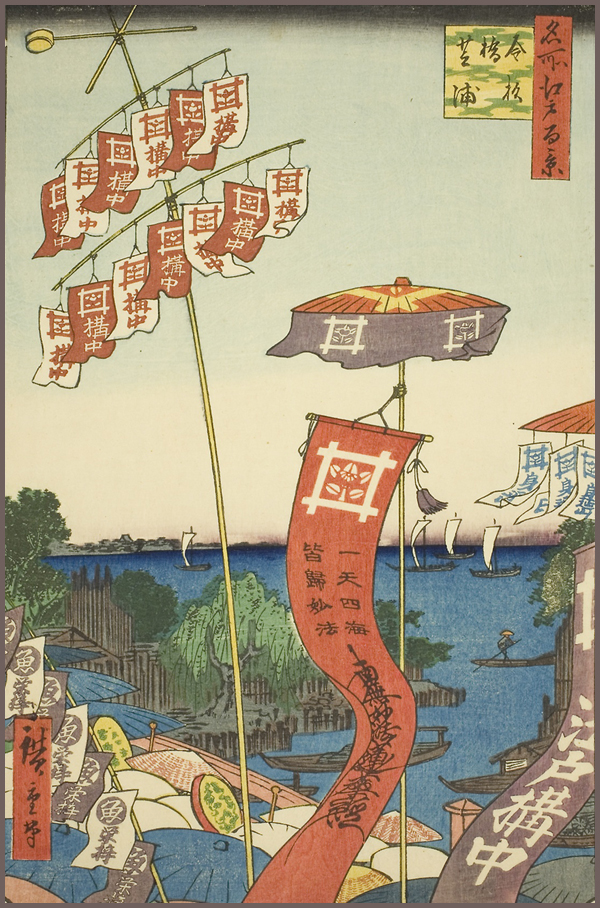 The print by Hiroshige shows a group of pilgrims on their way home from the 池上本門寺 Ikegami Honmon-Ji of the Nichiren sect.

. Temple Ikegami Honmon-Ji 池上本門寺 .
..... erected where Nichiren is said to have died. 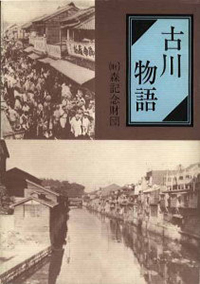 Furukawa River Story
A rarely known studied history of the small river and its neighborhood in Tokyo
The Furukawa, a small river that flows from Shibuya, Harajuku, and Omotesando into the Tokyo Bay, is one of the most important waters in Tokyo’s city center. Although a humble river, Furukawa has long been part of the local life in Minato Ward.
This book traces the history of the river and the unique role it played in the towns of Azabu-juban, Higashi-Azabu and Shirokane.
- source : mori-m-foundation.or.jp/wordpress... -